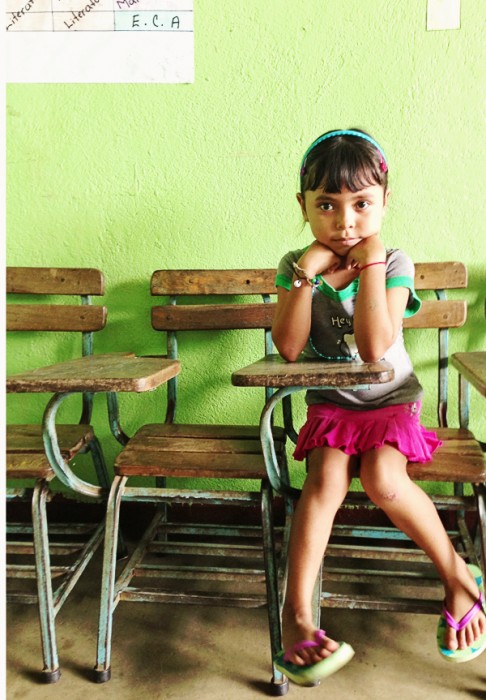 Diana is her name. She hasn’t left my mind much for the past few weeks. Her name means “divine.”

I met her on a little dirt road in the middle of nowhere and didn’t want to let her go.  She smiled a nervous smile and held tight to my neck. 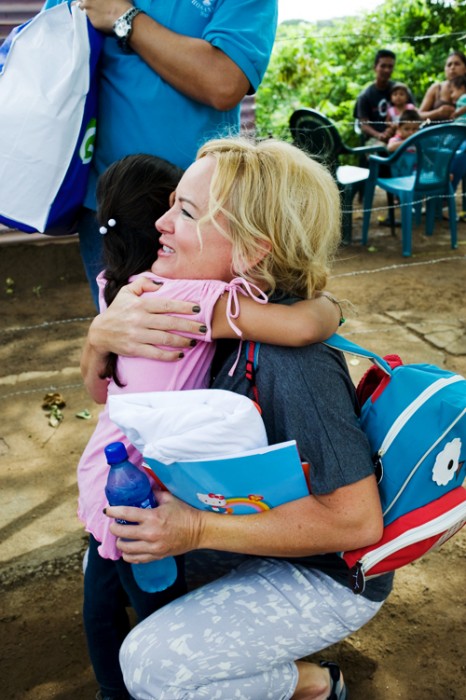 I’ve known for a week that today would be the magical day.  I felt like I’ve been waiting for Christmas.  And love comes in the flesh in ways we can’t always understand.

We walked to her house, hand in hand, and met the rest of her family.   Despite the prayers and the imagining what it would be like,  I couldn’t have known what was just beyond those pieced together curtains.  I ducked low and nearly  fell trying to climb down into the what they call the kitchen. 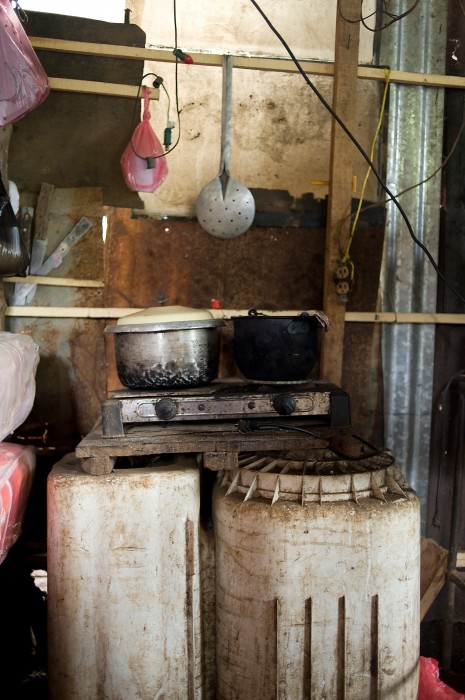 Claudia, Diana’s big sister, was bathing the 2 year old in a wash tub.  The little mama dried Mary Cruz off just like a pro, careful to wipe her little eyes and wrap her up tight. 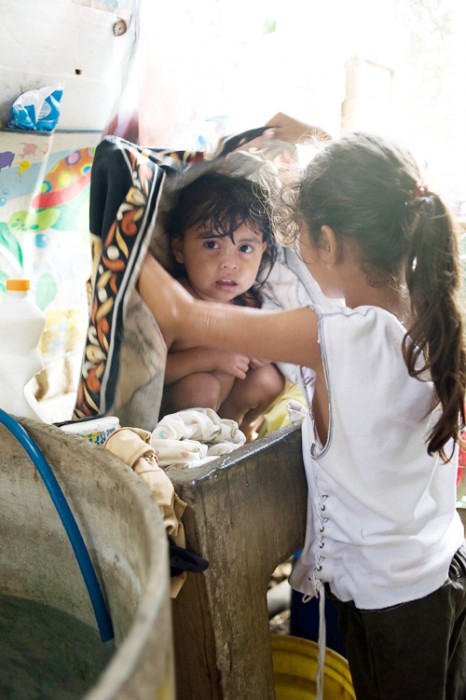 We sat on her cardboard bed and made fast friends over Hello Kitty and hair bows and hand games.  Time stood still for me today.  Those two hours will feed me for years to come. 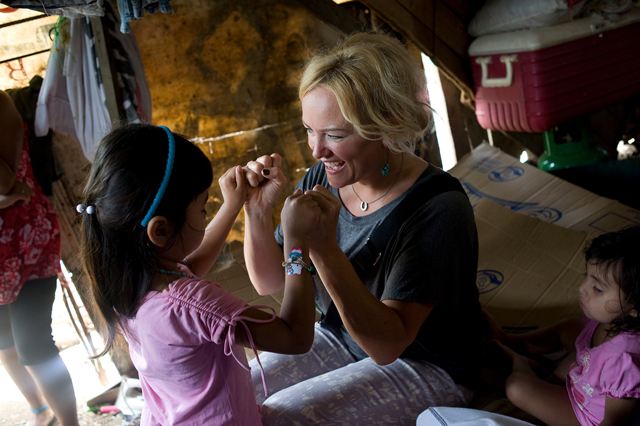 Little sissy sat shy behind us and finally decided that maybe the hair bows were worth the risk to meet the crazy woman with the yellow hair.  There’s something about Southern women and babies that you just can’t come between.  I may not speak Spanish but I’m fluent in hair accessories and they are love in any language. 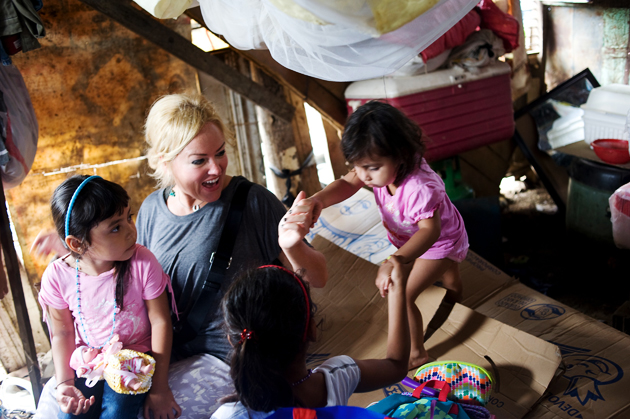 We spent an hour getting to know each other—playing legos and  baby dolls, braiding hair, and painting nails.  Southern girls, in training, I tell you! 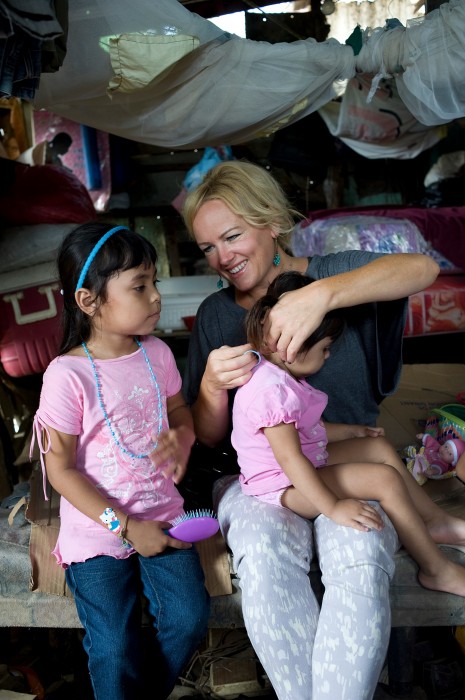 Diana’s father Roberto peeped around the corner from the back side of the house, where he had been working.

He had kind eyes and spoke gentle when he talked of his family. 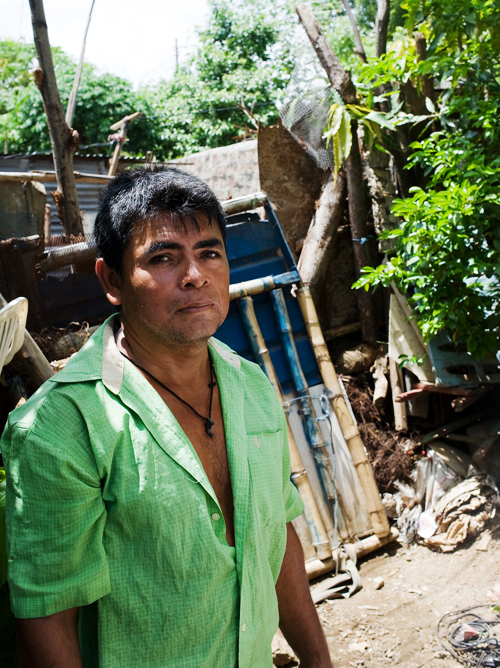 From the moment I met him, I adored him.  She is the first child I’ve met with a father in the house.  And her father loves her.  That does something permanent to a little girl’s heart. He works everyday, collecting and selling recycled trash, doing his best to support his wife and three daughters.  He pilfers through junk and waste and brings it back to their home to clean it up and see what can be salvaged.  I told him that I was so proud of him— for taking such good care of his family, for loving them enough to go to work for them everyday, for walking his daughters to school, and for saying yes when Compassion offered to enroll his daughters in the program. I thanked him for not giving up and for having the courage to stay.

And that’s when the dams broke.

I could barely talk.  My eyes are full of tears as I write about him now because I want to hug him again and tell him he’s brave for standing up for his family in a culture where most men would have left.  I told him that I grew up in a house without my dad and that I hoped he knew what a gift he was giving his girls. Diana looked up at me with love in her eyes, not sure why I was crying, but wanting to comfort somehow.  I wasn’t the one bringing the gifts that mattered today.  His grace always turns things upside down. 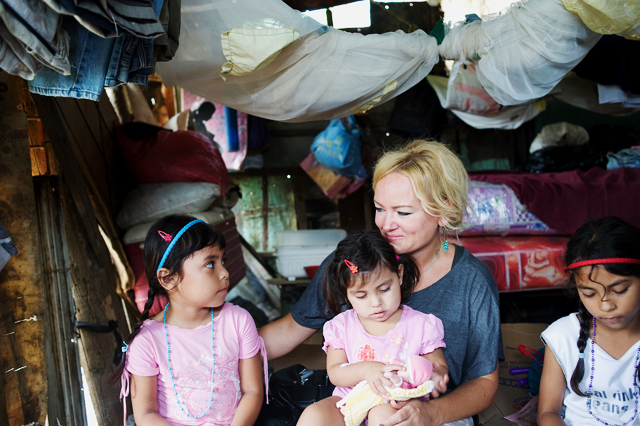 I just knew that I would visit her and want to bring her home with me.  But what I learned today is that she is home.  She lives in ramshackle lean-to with no indoor plumbing and cardboard for a bed.  But she is home.  She is surrounded by parents who love her and who are giving all they have, day in, day out, against all odds.  Their little shanty isn’t water proof and they hope that someday they will be able to do some repairs so that the girls don’t get wet when it rains.   They have hopes and dreams, that it won’t always be like this.  They want a better life for their girls but they are a family and we were so blessed by their commitment to each other. 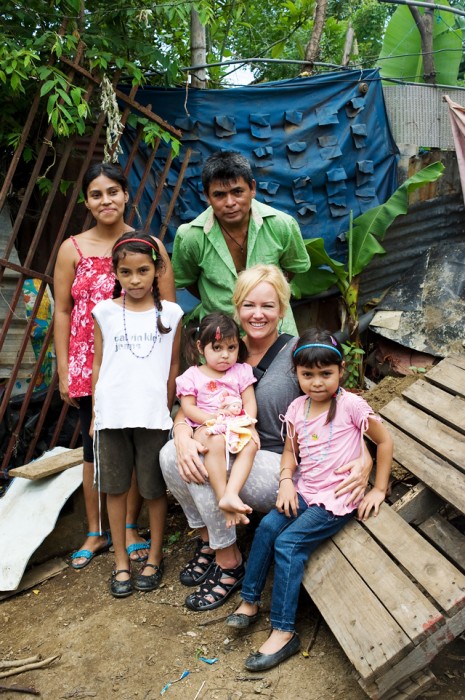 I can’t wait to see what grows from the fertile ground of a Father’s love, planted firmly in her heart. 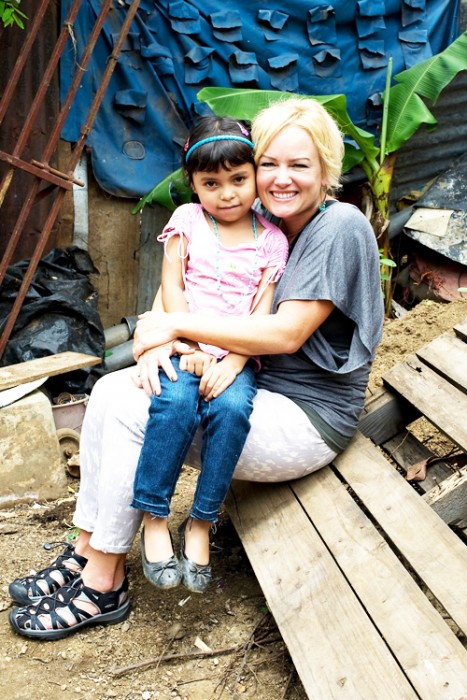 I’ve often wondered whether it really makes a difference.  What can $38 do for a child a half a world away?  It won’t even fill up my gas tank.

Today, I know the answer.

A few hours after my heart was wrenched from my chest at Diana’s home, I spent the afternoon with her at the Compassion Center.

I haven’t been at a place more full of joy in a long time.

I saw her as she sat and listened to the story of the woman at the well.

I saw her eat a bowlful of nourishing rice and chicken.

I visited her class and did the hokey pokey with her in Spanish.

I boogied with her at a traditional dance festival.  (Don’t worry, mamacita’s still got moves and they may well be even better in Nicaragua!)

I read her file and saw the picture of her when she graduated from kindergarten.

I looked at her medical papers and saw the free care she received when she was sick.

I saw a list of things she’s been given so far, such as school supplies, birthday gifts, and a school uniform.

I saw that $38 a month changes everything in Diana’s life.

$38 has built a bridge from a man-made lake in Bean Station to a dusty road in Managua.

$38 has broken my heart a hundred ways to Sunday.

But this day will shine  a like a beacon in my memory—the day the Father brought His daughters together, to show them both how much He loves them.

I thought I was bringing the gifts today.

I couldn’t have been more wrong.

There are 31 of Diana’s  friends who need sponsors. I would be so honored to work and pray alongside you at Center NI-186, Arms of Love. Let’s sponsor all 31 today.  I know we can.  I love you all and I promise you that what may seem like your way of caring for a child in need is really Christ’s way of caring for you. He’s always works crazy like that.

Thank you in advance, for bringing love in the flesh.  You remind me so much of Him. 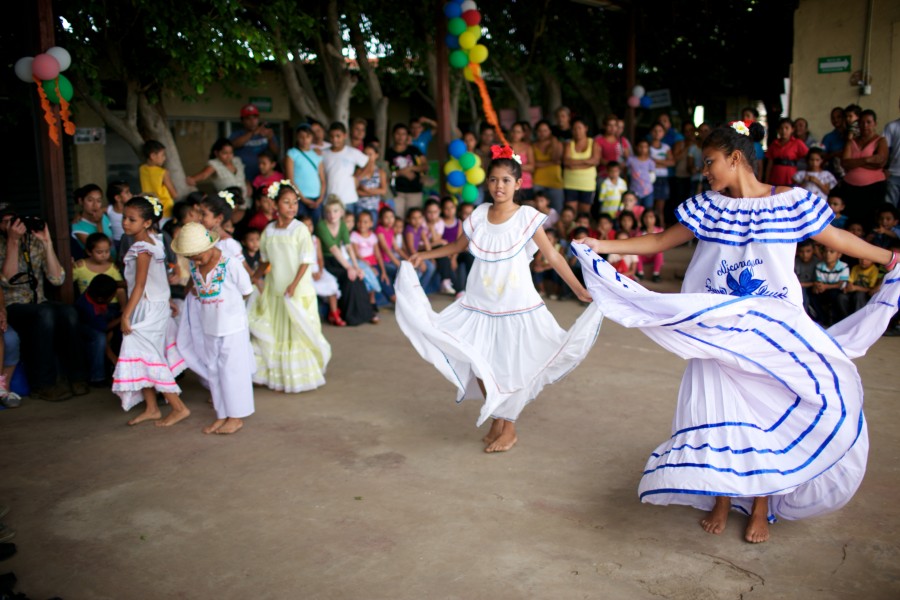 My other posts from the trip…….

When a Father Loves His Daughters, Nicaragua Day 2

I’ve Got You, Nicaragua Day 5

And a video of my favorite memories……