I was on my way to Knoxville today to get ready for the weekend with our kids home and I got teary eyed by the time I reached Dandridge and was full on crying by Strawberry Plains.  Now, I’m huddled in a corner table in Barnes and Nobles because I knew it was time to tell you this story.  So here you go.  (Soon you’ll see me at the MAC counter trying to make my face look presentable again. Don’t judge.)

Three years and a few months ago, Steve sent me a picture on my phone of a six week old baby boy.

“Maybe ours, someday,” he said.

So I picked up the phone and called him right that minute. He didn’t answer so I sat there alone with my heart racing, waiting to find out what he meant.

I mean, we had talked about adopting before. We’d even been to an attorney and asked her with fear and trembling if we were too old to be doing this  “Oh honey, you’re in your 40’s, you’re spring chickens.  Age is not the thing. Here’s the thing,” she said as she looked at our little-ish girls.  “You’re not going to get kids like that.”

What did she even mean kids like that.  So I asked her.

What I mean is, you’re not going to get adorable, perfect kids like the ones you have. You’re going to get kids with pain and problems and sometimes deep seated issues that are hard to deal with. Well, actually, isn’t that just all kids and all people, for that matter, I thought to myself. But I think I knew what she meant.

We said we wanted to pursue it but then Nick came and we thought we were done.  It was a wonderful and heart wrenching three years. But God worked a miracle (mostly in us) and now we have a budding chemical engineer that’s making all A’s.

Stevie finally called me back.

“Isn’t he adorable,” he said, never a man to get right to an explanation.

“Yes, he’s adorable but what’s going on,” I asked, impatient to find out if I needed to break out the dusty portacrib.

“His name is Thomas and his great-grandmother, one of my patients, is taking care of him and she said she’ll do anything to keep him from going into state’s custody. She’ll probably end up with him, despite her age and medical problems.  She’s a hero, Edie. And she may need our help at some point.”

Oh, okay sure.  I was both sad and relieved.  It made me question whether or not I even really still had the heart and desire for adoption. I thought about how easy my life was and how hard it would be integrating a baby back into the mix.  And I’d been a mom for 22 years already, by then. Maybe I wouldn’t even be very good at it.

But I kept Thomas’s picture on my phone and every three months for the next three years, I got a new picture and an update on our little buddy. Steve was completely in love with him.  He took videos and pictures and talked about the little fella all the time. We talked about him at home, how much he was growing, how special he was.

I remember the day Steve told me he was sitting up, then walking, then starting to talk.  I felt like I was watching him grow up before my virtual eyes and I missed him, if that even makes sense.

Then one day late last Spring on a Thursday, his great grandmother left a letter at Steve’s office asking if we’d take him for the weekend.

Steve brought the letter home and we both cried.  There had always been something so special about this kid for us, in ways that are hard to explain. It was the easiest yes.

I ran to the Knoxville the next day and got everything I thought we’d need to take care of a two year old for the weekend.  Legos, diapers, footed pajamas, a few clothes, sippy cups, and books.  Lots of books. What else was I missing? It’d been so long, I wasn’t even sure.

All day I worried.  I was so scared. Scared he would miss his surrogate mama, scared he wouldn’t sleep, scared we wouldn’t bond, or scared we’d bond too much, making the Sunday separation  a heart break. 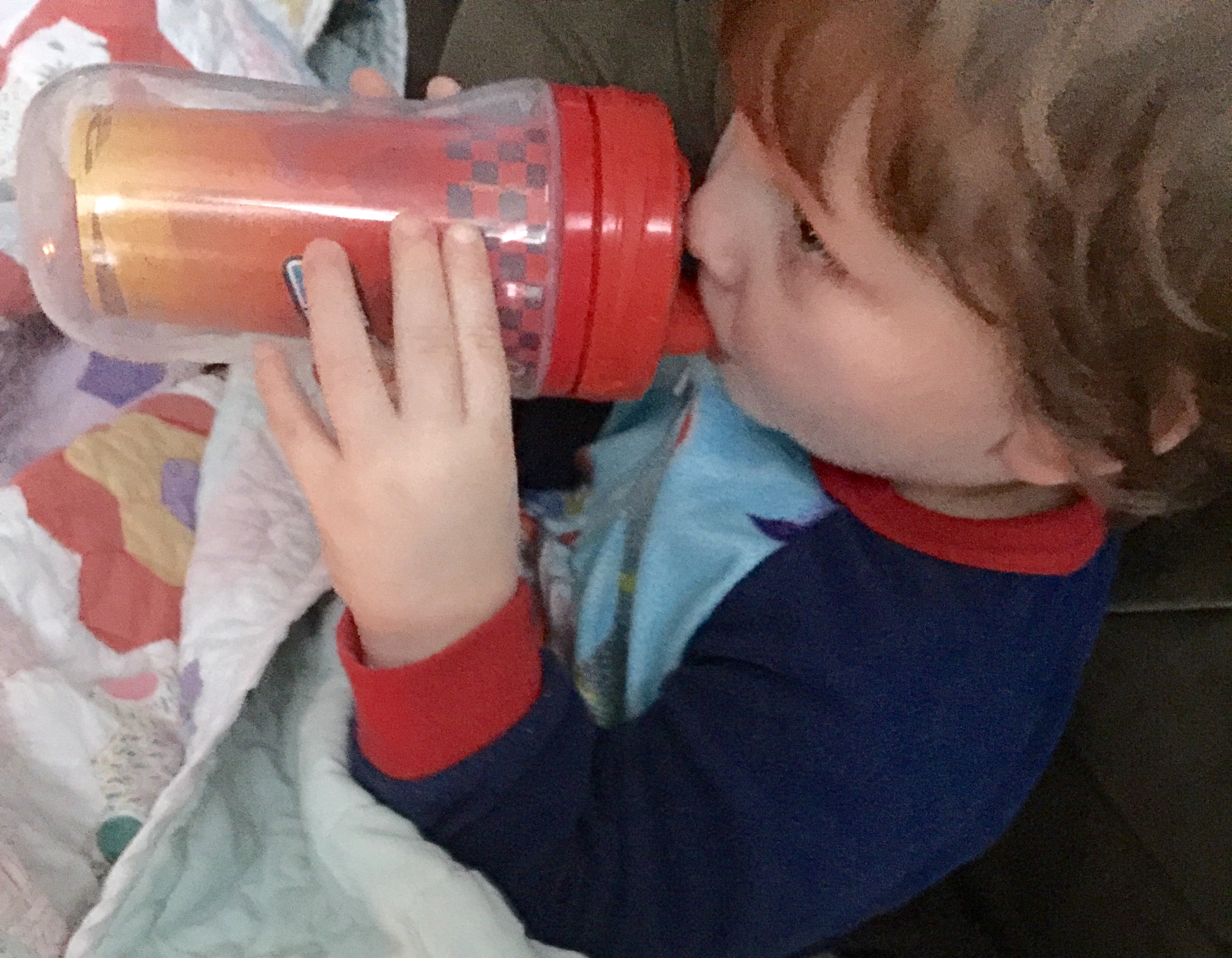 I don’t even know how to tell you what has happened in our hearts over this past year, except to say that we have the most little boy named Thomas—a rambunctious little gift from heaven that is so wonderful that I sometimes have to pinch myself that God has allowed us to love another child.

He jumps on the couch, pees in my shower, throws all the fruit out of my basket every Friday, makes me walk up and down the stairs 10,000 times, makes me sleep with him, and I wouldn’t have it any other way. 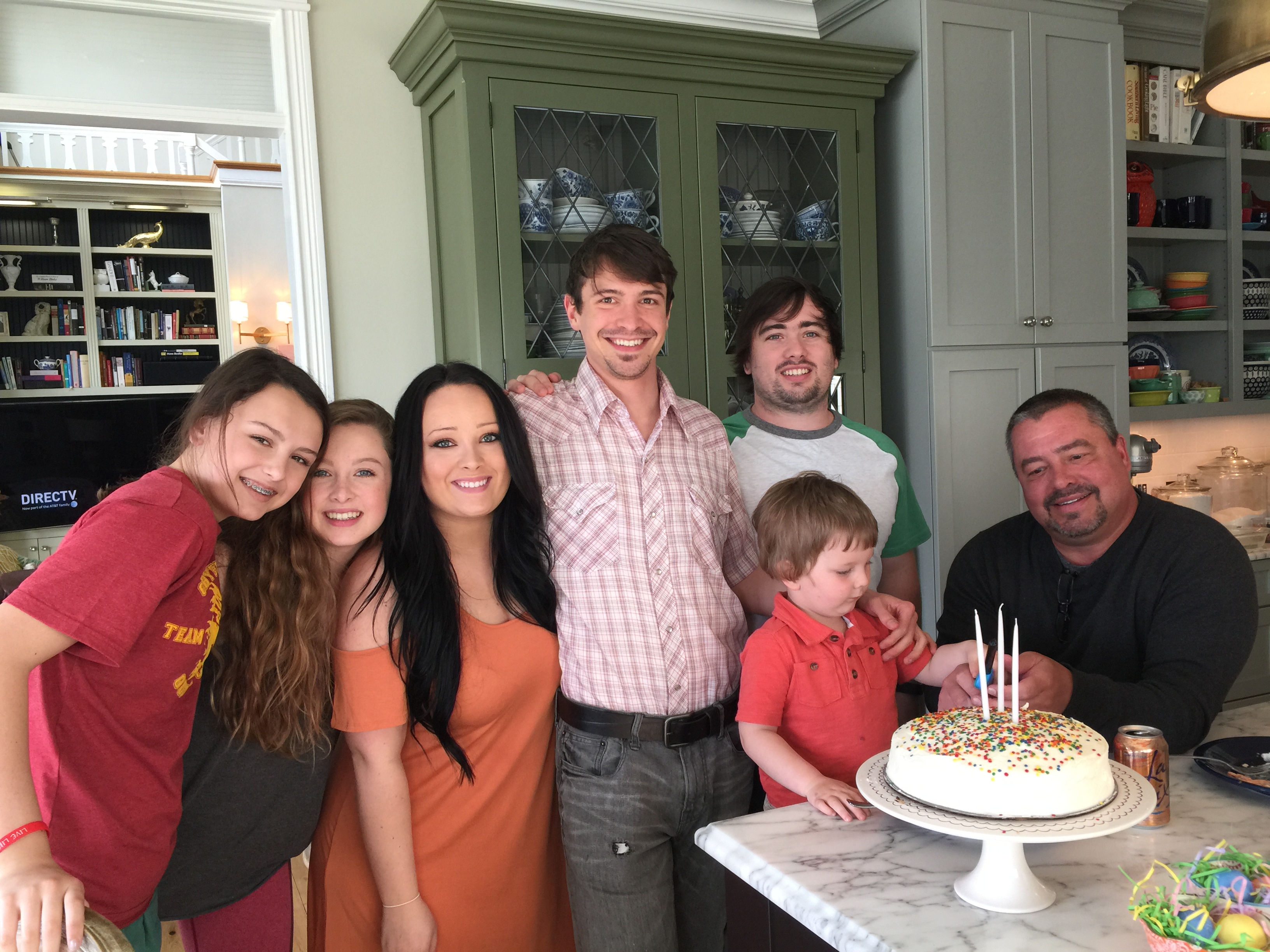 He came along in our lives about the time I was rewriting my book for the third time—my book about fatherlessness.  God’s timing was not lost on me and I marvel at how  gracious He is when He chooses the people He knows we need

All I can tell you is this has been the most heartbreaking, wonderful year of my life.

He’s ours as much as any person can be.  We think about him and talk about him all the time. He has a room in our house and free reign of everything.  When he refers to the dogs he calls them his dogs and he does the same with the boat and the four wheeler,  all Stevie’s tools, and everything else in our house. It’s all his. Rightfully so.

Near his third birthday, his mama agreed to let us have him baptized and he sits on my lap every Sunday, wallering (Appalachian for wallowing)  me plumb to death and slowly learning what it means to be loved by such a good father.

When he spends the weekends at our house, everything feels right in the world and when he’s gone, nothing does. 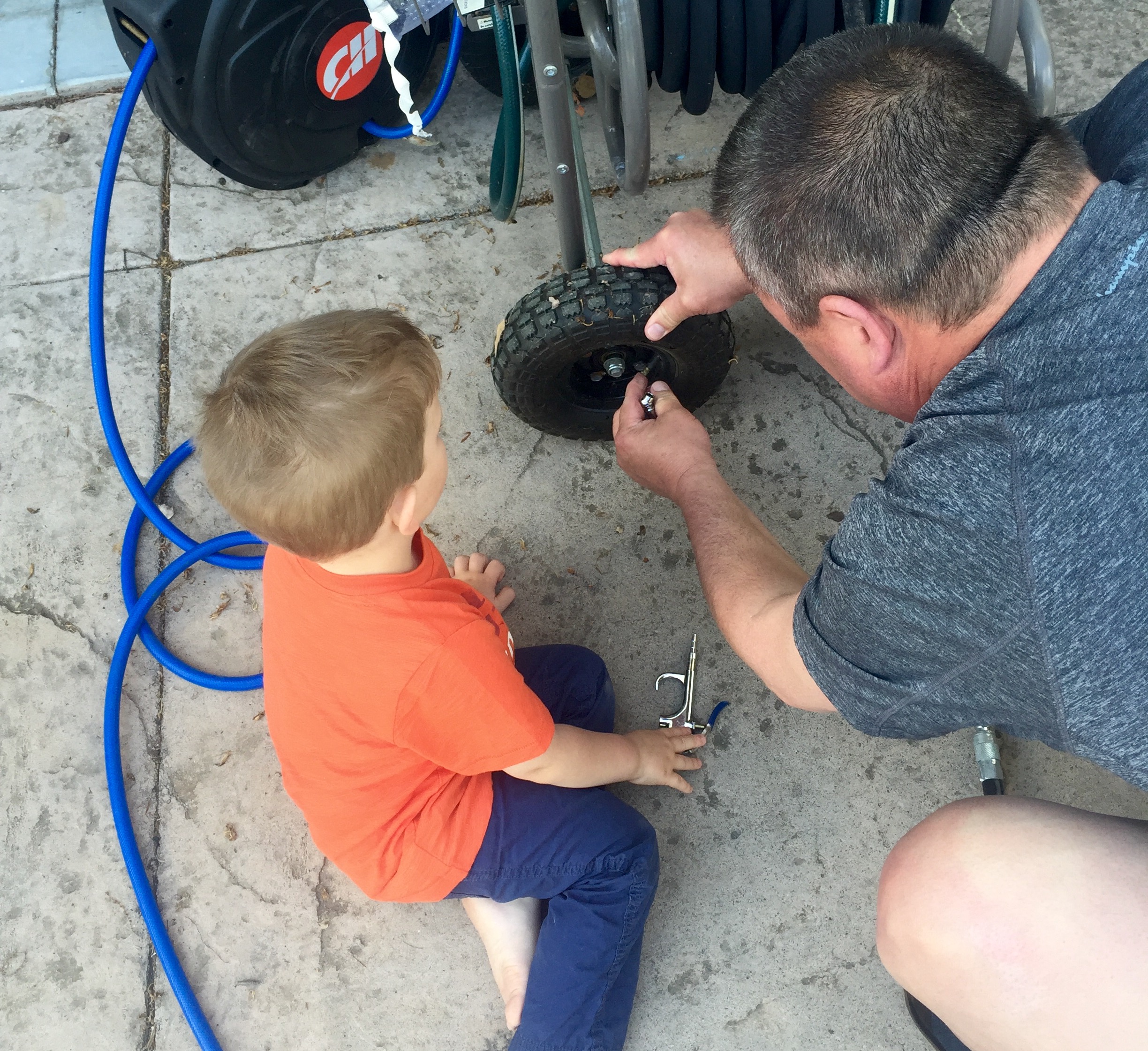 Last weekend when he left, he cried like a baby.  And so did we. For a solid hour. He doesn’t understand  and I’m sure it’s all as wonderful and confusing to him as it is to us.

But the alternative is not to have him.

So we sit with him in the pain—not promising that we can make it easier, but promising never to leave.

Having him and not having him has left my heart raw, like a wound that never heals, an ache which nothing will ease.

And now that I’ve told you his story, I better dry my eyes and get to  Trader Joes’ because he likes to make homemade pizzas on Friday night and he’s bossy about his cheese.  He also likes to feed his dogs peppawoni’s while he works.

Hope you have a great weekend. We’ll be in heaven with our boy! 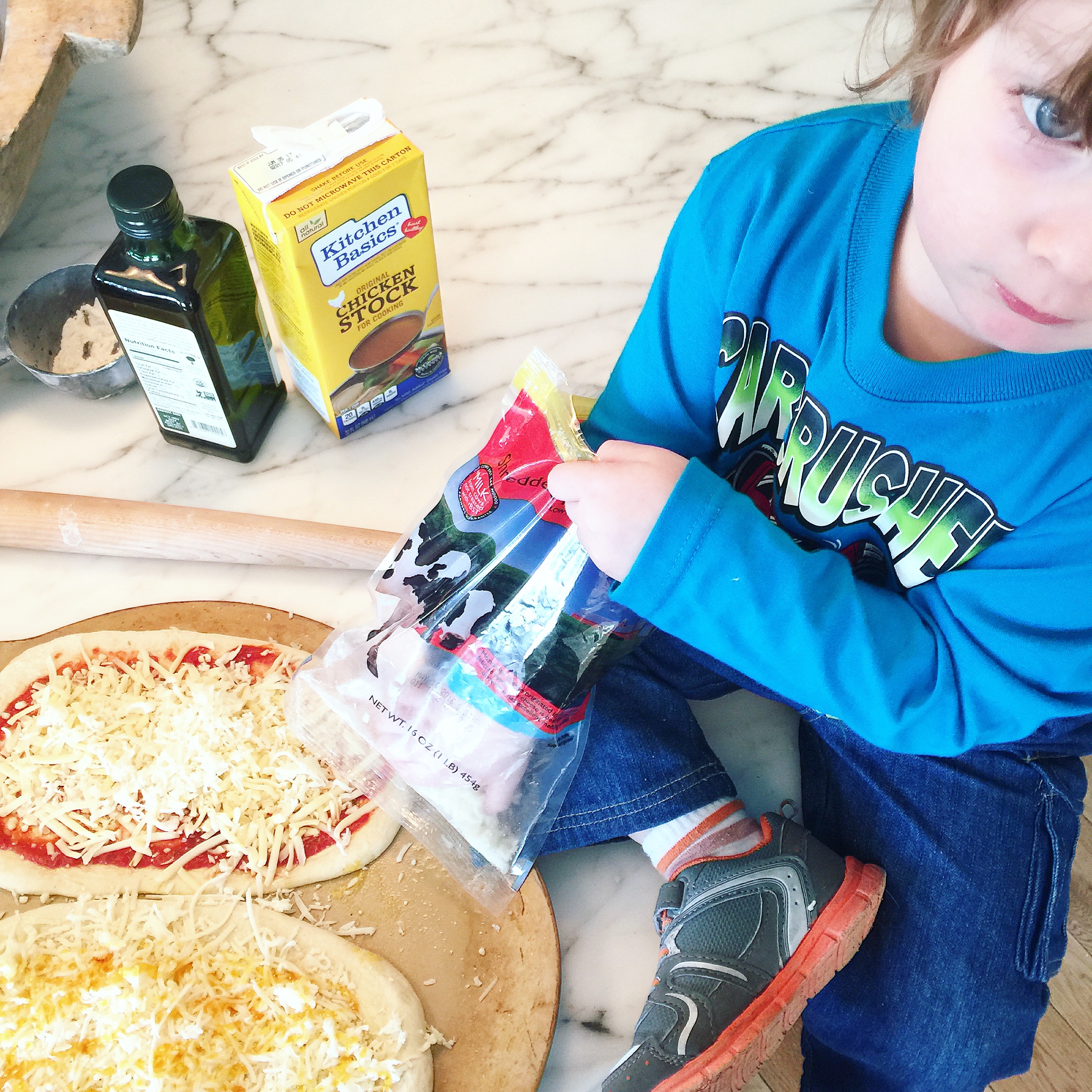