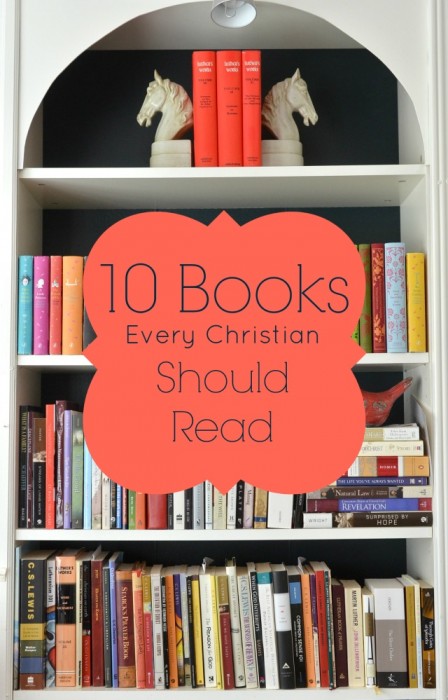 During my (very scant) downtime this summer, I did quite a bit of reading.  It seems like I’m either reading 4 books a week or none at all.  My summer favorite was Stephen King’s memoir, called On Writing: 10th Anniversary Edition: A Memoir of the Craft

.  I haven’t read even one of his fiction books (I’m a huge scared-y cat!) but his memoir is most excellent.  It got me thinking that despite the fact that I start things I can’t finish (like a classical book club), I am a book worm in the highest order.  I thought I’d make my top 10 list of books every christian should read and then in the comments, you can share ones you think should have made the list!

Surely you knew this would be number 1! This is perhaps my favorite book of all time, although that’s a little hard to narrow down.  The book is partially responsible for bringing Stevie and I back to the faith after some long, hard years in medical training.  Lewis gently leads the reader from his posture of unbelief to his unapologetic embrace of Christianity.  In Lewis’ own words, “A young athiest can never be too careful what he reads.”

This book is for Chesterton what Mere Christianity is for Lewis. I’ve read it five times and (finally understand a lot of it!) enjoy so much every time I read it. Philip Weingart said about Orthodoxy,

“Since Chesterton was both a genius and the son of a saner era than our own, the ideas which coursed through his head may astonish modern readers. He seems to turn the world on its head; the book is a continuous feast of the delightfully unexpected. To Chesterton, faith is reason, orthodoxy is liberty, the order of our universe is as unexpected as the wildest fairy tale, and heeding tradition is as natural as allowing all citizens to vote. Modern readers at first will think him just a little bit crazy, but as they warm up to his approach, they will begin to feel that perhaps his point of view is healthier than theirs, and in the best of cases, they will begin to right themselves.”

This is Augustine’s autobiography of his journey to God.   He was converted as an adult and went on to heavily influence medieval Christianity.

“You called and shouted and burst my deafness. You flashed, shone, and scattered my blindness. You breathed odors, and I drew in breath and panted for You. I tasted, and I hunger and thirst. You touched me, and I burned for Your peace.”

I’m reading this book now, but it makes every MUST READ list and I can see why, so I added it to mine.

A retelling of the fall in poetic form.

“Above all, don’t lie to yourself. The man who lies to himself and listens to his own lie comes to a point that he cannot distinguish the truth within him, or around him, and so loses all respect for himself and for others. And having no respect he ceases to love.”

This little book is so chocked full of good stuff, you’ll have to read and reread.

“Christian community is like the Christian’s sanctification. It is a gift of God which we cannot claim. Only God knows the real state of our fellowship, of our sanctification. What may appear weak and trifling to us may be great and glorious to God. Just as the Christian should not be constantly feeling his spiritual pulse, so, too, the Christian community has not been given to us by God for us to be constantly taking its temperature. The more thankfully we daily receive what is given to us, the more surely and steadily will fellowship increase and grow from day to day as God pleases.”

If you start with one book on this list, this should be it. It explores the basic tenets of Christianity from the perspective of the historic faith.  Veith is Lutheran (like me) but this book is invaluable for any believer.  It’s refreshingly Christ-centered in every aspect.

Most lists include this book and I have to agree.  I read it aloud with my girls when they were in 3rd grade (I think?) and it took almost a year.  Go slow.  It’s one to steep in and cherish.

The world is charged with the grandeur of God.
It will flame out, like shining from shook foil;
It gathers to a greatness, like the ooze of oil
Crushed. Why do men then now not reck his rod?
Generations have trod, have trod, have trod;
And all is seared with trade; bleared, smeared with toil;
And wears man’s smudge and shares man’s smell: the soil
Is bare now, nor can foot feel, being shod.

And for all this, nature is never spent;

There lives the dearest freshness deep down things;
And though the last lights off the black West went
Oh, morning, at the brown brink eastward, springs —
Because the Holy Ghost over the bent
World broods with warm breast and with ah! bright wings.

Here are my first five alternates:

So, now, you tell me what you would add to the list.  It’s hard to make a list of just ten!

And have a glorious week!

(All links are affiliate links.)