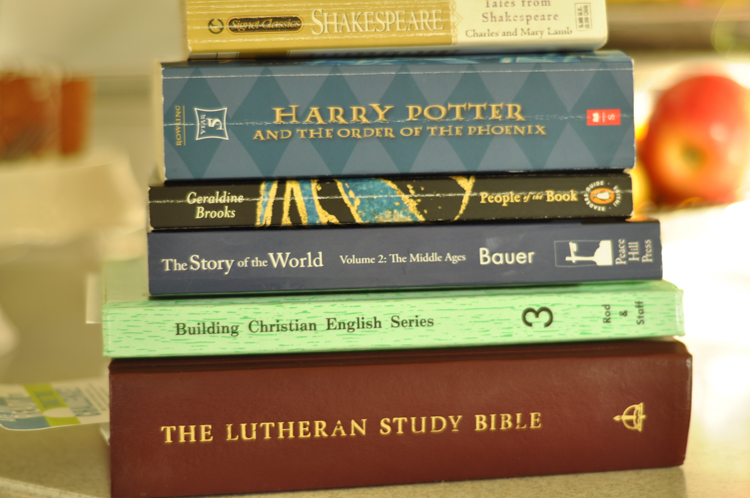 If I were stranded alone on a deserted island and could only take the bare necessities with me, I’d take my espresso maker and my books.

I know what you’re thinking.

I’m gonna wish I had my toothbrush and my laptop. Okay, I’ll take those too.

If there’s one thing that I don’t like about hotel rooms or traveling in general, it’s that I don’t have all my books with me.

But they’re so a part of who I am that I want them near.

I re-read parts of my favorite books all the time. Some of my favorite C.S. Lewis quotes play like a melody in my head at the most serendipitous times.

If there’s anything that I hope to leave as a legacy to my children, it would be a love for reading good books.

It was recently pointed out to me by a facebook friend that I seem to only read male writers.      So, I promptly surveyed my nightstand and various bookshelves and it’s true. I seem to be quite partial to the boys.   But in my defense, I like theology and classics and historical fiction, a large percentage of which are written by men.     I do have a few favorite female authors that I truly respect, like Geraldine Brooks, Louisa May Alcott and JK Rowling. As a matter of fact, J.K. Rowling may be singlehandedly responsible for giving me back my childhood by teaching me to love fantasy.
(side note: we are huge Harry Potter fans and are going to see The Deathly Hallows tomorrow, on opening day at 12:30. And before you send me hate mail, please read this post and listen to these podcasts—very eye opening about the disservice done to Rowling by the christian community)

Amy is the author of this year’s new bestseller Bloodroot. She was also recently awarded Tennessee’s Writer of the Year award AND named as one of Amazon’s debut fiction writers this year. I was fortunate enough to meet Amy a few weeks ago at our local fall festival at a book signing. Several of my friends had told me that I HAD to read her book, that I’d love it—but when I met Amy, I had yet to read it so I bought a signed book and read it within a few days. For a little backstory, it’s a book about growing up in Appalachia, with plenty of ‘dark and twisty’ truth thrown in. There’s so much I wanna say about the book but I’ll do it by way of an email I sent Amy, who has since graciously agreed to come to my bookclub in January!!! (she lives ten minutes from me, btw)

I’ve been devouring your book just as fast as my little ones will let me steal away. I woke up at 4a this morning and couldn’t wait to get back to the story.
It happens to me every now and then with a book or some music—–that soul-stirring that makes you squirm a little and lays bear your own vulnerabilities in a way that can’t be conjured up…….Your writing has had a similar effect on me as when I first listened to the Avett Brothers’ music. It has forever changed me and how I see the world. It validates my years of pain. It speaks healing and acceptance to the darkness that lingers near. I won’t be the same.
So thank you for truth, which leads us all closer to home.
Your newest adoring fan,
Edie

At bookclub tomorrow, I get to tell my friends that Amy Greene, in the flesh, is coming to my house for book discussion.  How cool is that?  Maybe we’ll even skype some of you in to join us too.

You should definitely read the book and  bear in mind that for many folks, life has had it’s share of the  dark and twisty.

And that brings me to my final point.   At  bookclub tomorrow, during this, our poetry semester, we’re bringing lyrics to two of our favorite songs for discussion.  I am a fiend for song lyrics.     I knew right away that for one of my songs, I’d bring ‘Head Full of Doubt-Road Full of Promise’ by the Avett Brothers.   I’ll even take the liberty to say, since it’s only my opinion anyways, that this song is a lyrical interpretation of Bloodroot.  And perhaps in some ways,  my own little life for that matter.

So, I’d be EVER so interested to know some of your thoughts on this song, its’ lyrics, its’ meaning.

Or else tell me your favorite song (lyrics) and why.   Just so ya know, if you pick Justin Bieber or Lil’ Wayne, and you’re not under 15, we may have to renegotiate the rules of our friendship.  Amen.

It would probably be fair to say that many of the artists’ I have mentioned have been criticized for the ‘darkness’ they portray.  But those of us who’ve wrestled with real darkness in our hearts and in our past, can say with all boldness that the darkness cannot be faced unless it is acknowledged and brought to light.   I’m proud of those who have helped us to ‘see it’.

What do Amy Greene and The Avett Brothers and JK Rowling, for that matter, have in common?  They are gifted artists who speak truth in powerful ways.

And truth leads us all closer to home.

When nothing is owed or deserved or expected
And your life doesn’t change by the man that’s elected
If you’re loved by someone, you’re never rejected
Decide what to be and go be it

P.S.  I’m in the process of setting up an affiliates program with Amazon of things I like.  I’ve added Bloodroot so far. If you click to buy the book here, Amazon will send me 3 cents. Or so.