If you think you’re tired of waiting on this kitchen, imagine me—cooking a big heaping pile of onions at the exact same time the guys are installing that cabinet over the microwave.  Saw dust was flying everywhere and I think the installer could hardly believe I was cooking right in the middle of it all.   And I’m sure he could hardly believe I was already putting dishes away when he still had lots of work to do.  I’m just a wee bit impatient.   Just a tad.

So here’s where we are:   lots of finishing work to do, countertops to be installed next week along with sink, dishwasher and hood.

I decided to go with subway tile so this is truly gonna be an all white kitchen.  I can hardly wait.  Actually, I’m not really waiting.  I’m using this kitchen almost to its’ fullest already.   I’m probably a pain to work with but let’s go:  snap, snap.   Get it done already! 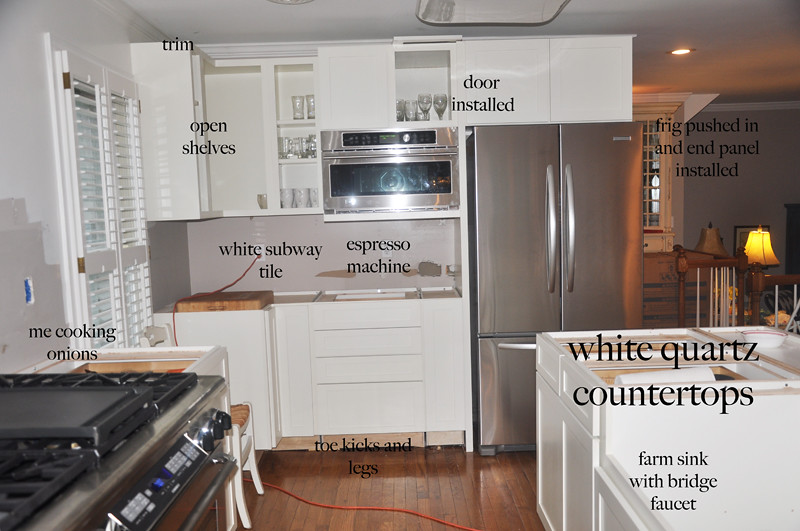 and I FINALLY decided on knobs. Knobs can drive a girl insane. There are so many choices.  I’ve looked at hundreds and hundreds of knobs.  I finally settled on this 1 1/4 inch antique brass knob from The Lion’s Head.   They are simple and clean and classic and exactly the color I was looking for.   And my installer is happy that they are knobs and not pulls.

This whole process has been worse and at the same time not as bad as I thought it’d be.   My new frig came and didn’t work but they finally got it fixed.

My hood came with a huge dent in it and had to be reordered from California.   My pantry cabinet came with no shelves.   All my plumbing and electrical have had to be redone.  In short, my sanity is hanging on a wet spaghetti noodle.    But I realize it’s all just a brief inconvenience and soon I’ll having a wonderfully functional, beautiful kitchen.    In the meantime, the workers will just have to put up with my homeade jelly-making, onion-sauteing self until this is all done.  I hope it makes ’em hurry. 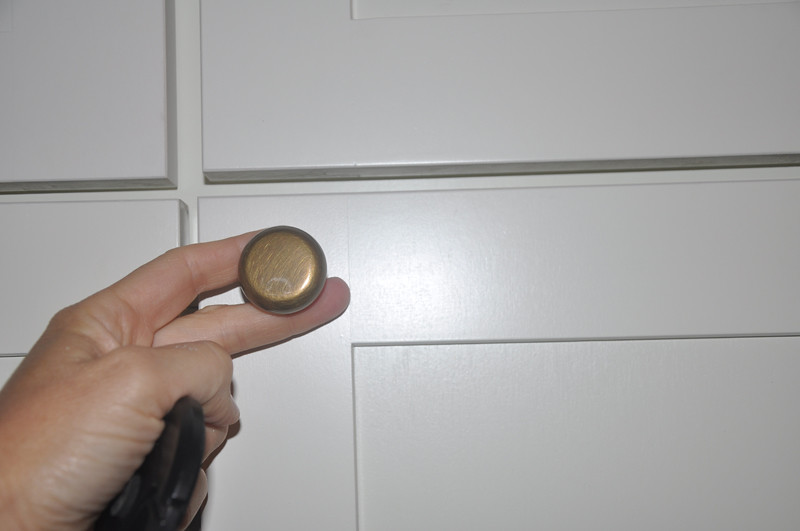 In non-kitchen news, the girls and I are putting together a 500 piece puzzle on the rainy days and I’m re-reading G.K Chesterton’s Orthodoxy.   I like to call him my favorite catholic (but really my favorite catholics are my wonderful catholic friends like Sue and Kim and Donia—who is coming to visit soon, btw!).   He was an English writer and christian apologist in the early 1900’s and is often referenced by C.S. Lewis.   He was a brilliant man which explains why I only understand about half the book my second (or third?) time through.  But oh, is it worth a read.   Just be patient and plow through it and you won’t be disappointed.   Above mention catholic friends, who saw me reading Chesterton at swim practice, promptly made fun of my ‘summer reading’.     Sorry, I don’t do chick lit and I will continue to have the night stand of a 40 year old seminarian!

Chesterton has a beautiful and refreshing way of seeing the world.    And it has been just what the dr ordered during this trying remodel.   He speaks of rationalists, who  point to the mere repetition of things in the world as a sign of deadness;  ie, the sun rising, the tides crashing, the monotony of life–day in, day out.    He says,

The recurrences of the universe rose to the maddening rhythm of an incantation, and I began to see the idea….It might be true that the sun rises regularly because he never gets tired of rising.   His routine might be due, not to lifelessness, but to a rush of life.   A child kicks his legs rhythmically through excess, not absence of life.   Because children have abounding vitality, because they are in spirit fierce and free, therefore they want things repeated and unchanged.   They always say,  “Do it again.”   For grown-up people are not strong enough to exult in monotony.  But perhaps God is strong enough to exult in monotony.  It’s possible that God says every morning,  “Do it again” to the sun; and every evening,  “Do it again”  to the moon.    It may not be automatic necessity that makes all daisies alike, it may be that God makes every daisy seperately, because He has never got tired of making them.  It may be that He has the eternal appetite of infancy;  for we have sinned and grown old, and our Father is younger than we.  The repetition in nature may not be a mere recurrence;  it may be the theatrical ENCORE of heaven.

See, you should read it.    Hope your weekend is filled with good books and plenty of good food and smooches! 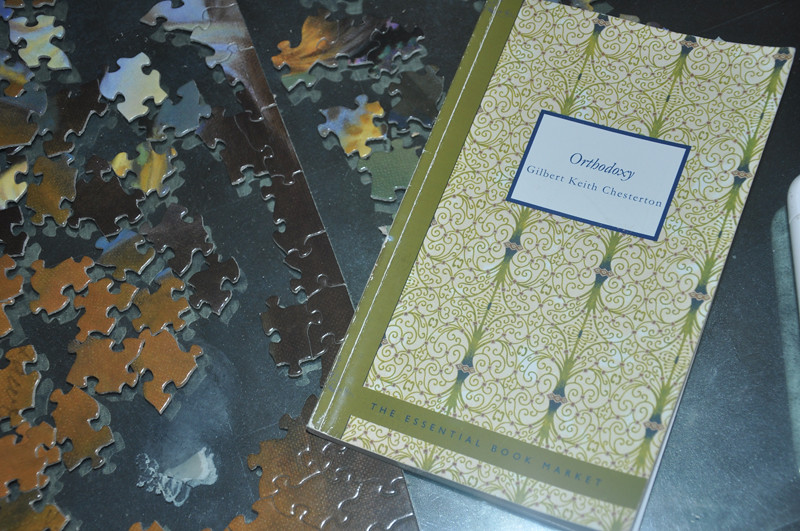