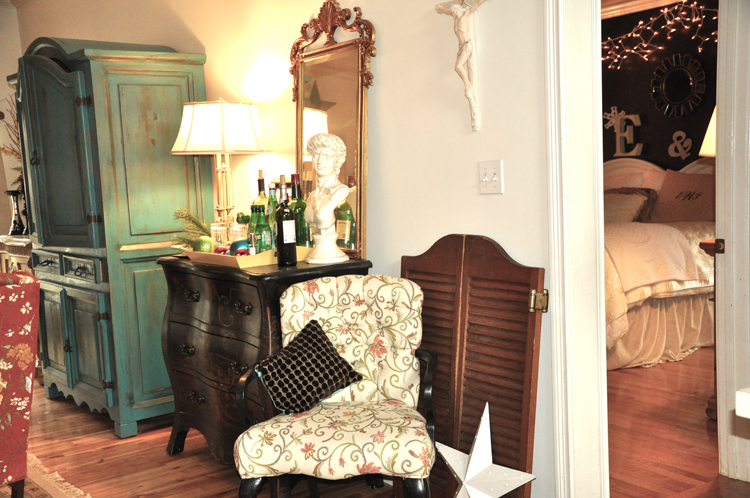 {photo of my favorite accessory and flea market find :  the bust of David}

This year, in lieu of my traditional list of New Year’s resolutions, I decided to do a ’40 in 40′; forty things I wanted to do in my fortieth year of life. But because I couldn’t quite figure out photoshop and because 40 is the new 30, the list only has 30 things on it.

And really, does anyone need the undue pressure of 40 resolutions?   I have enough guilt as it is.

On my list was the somewhat daunting task of reading the Bible through in 3 months. I first heard chatter of it on Twitter and then downloaded the reading schedule here. I purposely haven’t written about it yet because honestly, I wasn’t sure if it was feasible for me. I have seldom been able to keep my ‘read the bible through in a year’ promises—much less three months.

But I’m pleasantly surprised to tell you that I think it’s been one of the most wonderful things I’ve ever done. I’m on day 27 {I started January 1} and I just finished ‘the Samuels’ a few days ago! It takes about an hour a day and I usually try to do it in the wee morning hours before the troops wake up. I’ve had to play catch up a little on the weekends but I’ve pretty much stuck to the schedule. It is a completely different and fascinating way to read the Old Testament and I highly recommend it. You’re able to get a broad sweeping overview of the history of the Jewish people that is just not possible if you read it on a slower pace. I don’t think this is the last time I’ll do it this way and I pray I have the discipline to finish on schedule. You definitely should add it to your bucket list.

Having just finished II Samuel, I can’t get King David off my mind. Many of you know that he is my favorite bible character aside from Christ of course. I love his story; I find hope in the fact that God uses such deeply flawed people through which to bring us our very redemption. David’s sin with Bathsheeba, clearly an act of outright rebellion against God, brought forth the wise King Solomon and would eventually lead to the birth of Christ.

I’m also re-reading Francine Rivers fiction book Unspoken on the life of Bathsheeba and all this led me to play and replay one of my all-time favorite songs Hallelujah, written by Leonard Cohen and performed by a host of amazing artists including Jeff Buckley and my very own favorite artist Brandi Carlile. The song is about the life of David but more deeply is a song about suffering, love, repentance, doubt and longing.

Our true hallelujah cry to God is often ‘cold and broken’

and the transformation that He is seeking to forge in us is painful.

So I’m a teeny bit bossy today, but I think you should  1) ponder the three month reading schedule  2)   read Unspoken and 3)  download Hallelujah from iTunes. This video is Brandi’s Carlile’s interpretation of the song—which she says was one of the songs that ‘found her’ and transformed her. {Caiti and I have secured our tickets to see her in concert in February, thus checking off another thing from the list.} I also included the lyrics below the video.

Well I heard there was a secret chord
that David played and it pleased the Lord
But you don’t really care for music, do ya?
Well it goes like this :
The fourth, the fifth, the minor fall and the major lift
The baffled king composing Hallelujah

(Yeah but) Baby I’ve been here before
I’ve seen this room and I’ve walked this floor, (You know)
I used to live alone before I knew ya
And I’ve seen your flag on the marble arch
and love is not a victory march
It’s a cold and it’s a broken Hallelujah

Post-Edit:  I use the new Lutheran Study Bible which was just released last October.  I can’t say enough wonderful things about it.  It is by far the best study Bible I’ve ever owned.  It’s chocked full of great stuff;  prayers, maps, devotional material, greek and hebrew words and references, and much more.   It’s an English Standard Version and can be perused or purchased at Concordia Publishing House.  {And it’s not just for Lutherans!}  There is an official 90 day study bible but this one is so full of good stuff that I doubt I’ll ever use another one  for study/bible reading  purposes.