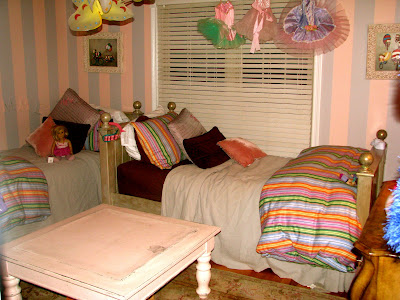 Be very quiet.  I’m in the middle of covert operations the likes of which you haven’t seen since Jack Bauer took the Chinese consulate.    I was having a fine Sunday watching the Vikings get beat and reading “Uncle Tom’s Cabin”  when I came across this section in the book

“To do
So,  as soon as I read that,  I began “clarin’ ” things up in the girls’ room and decided to get rid of some stuff they no longer play with.   I’m no rookie at this either,  so I did it while they were at a friends’ house and I used BLACK garbage bags……’cause we all know how crazy a girl can get when you threaten to take her half-naked, matted hair barbie to Goodwill….the one she hasn’t played with in 4  years.   You’re dying to know what I put in the black bag aren’t you?  Well, I’m gonna show you but let me first say that when I bought the items you are about to see go into Witness Protection,  it was Christmas,  I was hormonal and at an all time low in my mothering skills…..I’m gonna say rock bottom even.   And most of it was that Jamie Knoxville’s fault,  who just happen to call me three days before Christmas to tell me about the Cheetah’s Girls’ Tour Bus.  So,  here’s goes nothing. 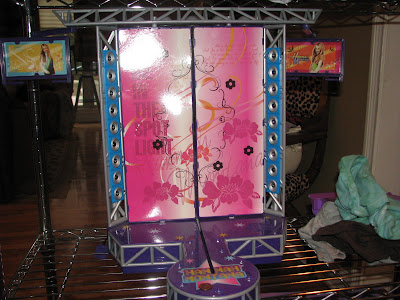 The Hannah Montana Stage…..equipped with roaring crowd noise and spinning ‘Hannah’ holder which allows her to ‘mingle’ with the crowd while performing….. 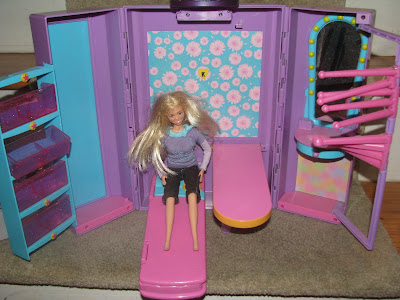 The Hannah Montana dressing room……which we happen to have caught her in…matted hair and all…..(sorry for the intrusion, Hannah) 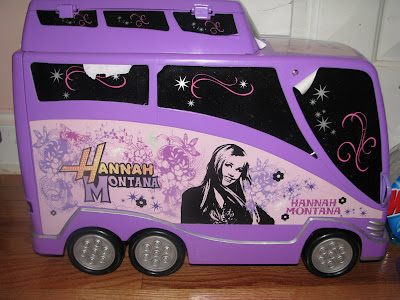 And finally,  the HM tour bus.   This thing is pimped out to the max.   I actually secretly like it.  I think I may be the only one who has played with it with any regularity.   So,  never mind the fact that these are not the most edifying, educational toys out there,  why……I ask you why do these little girls not play with them?   Are they having secret conversations about how I’ve hit rock bottom and succombed to cultural influences?   Do they see through purple and pink plastic crap and feel they are somehow ‘above’ this shallow form of entertainment?   I do not know the answers to these questions,  but I do know that I would have bet a million dollars back in December that these not-so-cheap, made-in-China toys wouldn’t have lasted ’til March. I was terribly wrong….they’re gonna last forever because they never get touched.   Now, all that said,  if those two girls happen to ‘see’ these items in the Goodwill pile,  they would go completely nuts……crying, screaming,   you name it.   Hence the need for the covert operations. I’ll have to sneak that bag to the car in the cover of night and I’m not gonna lie…..I’m a little scared…..who knows what’s liable to happen when they realize that Hannah has taken her ‘tour’ to another city.  They really shouldn’t care….I’m the one who’s dressed her, combed out that matted blond mop,  and I’m the one who’s put her in the tour bus to lounge in the garden tub. But I digress.  Meanwhile, we will keep playing with our Legos and Lincoln Logs and American Girl dolls…..toys you don’t have to be embarrassed to say  your children own.  Hannah will do well in witness protection….she’s got that whole Miley thing going for her.