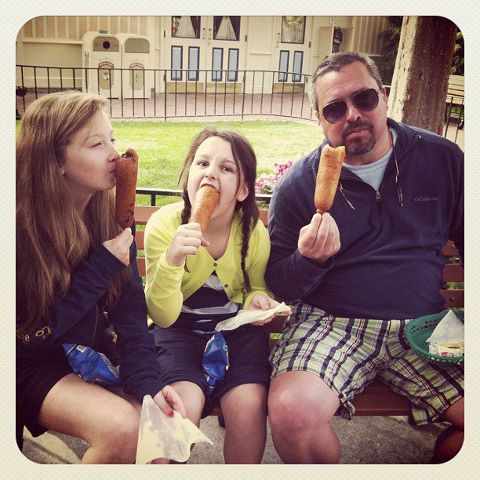 At the risk of being thrown out of America, I’m gonna go ahead and say it—-I hate giant theme parks.

I’m a little scared to say it out loud because people are crazed for them.  How do I know this?  Because I went to Disneyland yesterday and I’m fairly certain that half of California was there too and they all seemed to be thoroughly enjoying themselves.  Everyone, that is, but me.   So what’s wrong with my theme-park loathing self?    My disdain for giant theme parks has made me question my patriotism and even my motherly love.   How can a woman  who claims to be an upstanding God-fearing American citizen and a mother of four precious children hold a grudge against the ‘happiest place on earth’?

It’s complicated but I’ll try to break it down for you.  Perhaps a numbered list is in order.

1.  I’m skeptical about a place to which EVERYONE else in the entire free world is flocking.  I’m counter cultural.  I love my simple small town life,  I homeschool my children,  and don’t like popular music, popular culture or popular almost anything.   If everyone’s doing it, I’m probably not.   If EVERYone loves it, I probably don’t.  The fact that Disney is a rite of passage kinda makes me a little indignant.  I’m not a fan of the herd mentality.

2.  Fairy tales are magical.  Disneyland is not.   Some things just don’t translate.  Can you convey the depth and beauty of an ancient fairy tale in a bumpy roller coaster ride with a million other people vying for the best seat?  I don’t think so.   The Cinderella story is every girls’ dream but chasing down a self-absorbed teenager in a Cinderella costume for that once in a lifetime photo is every mother’s nightmare.   Or at least this mothers’ nightmare.  There is nothing more precious than the look on the face of your children when they hear their favorite fairy tale for the first time.  That cannot be bottled up and sold for $80 in an admission ticket.  It just can’t.

3.  Surprisingly, my children did not seem to be having the times of their lives either.   They were tired and crotchety and whiny just like the other eight million children there.  They wanted a $12 snack after every ride and finally (at about 2:30) said,  “Can we just go back to the hotel?”    Now THAT was music to my ears.   And while many of you may be bristling at the thought of us not getting our ‘money’s worth’,  all I could think was at least we didn’t have to pay in money AND in prolonged torture.   We were all so relieved to be done with it and back home to the real happiest place on earth.

4.  In general, I’m not a fan of wall to wall human traffic,  bad coffee with powdered cream,  persistent nausea from  a day of spinning and bumping and jerking,  or corn dogs for lunch.  Go ahead and call me crazy.  As corn dogs go, however, they were pretty darn good.  And of course, it wasn’t all bad.  I can have a good time almost anywhere and I enjoyed being my family all day. The best part for me was watching the silhouette artist work her magic in less than a minute, making the most gorgeous silhouettes of my girls.  I only wish they didn’t say “Disneyland” at the bottom but I’m sure I’ll find a creative cure for that.

So, Stevie and I took one for home team this week.  We high-fived each other on the way home because we’re crossing our fingers in the hopes that we’ve paid our dues to the theme park gods.  Our children won’t be able to bemoan to their psychiatrist how their parents never took them to Disneyland.  And I don’t think our kids ever suspected we were miserable.  We laughed and feigned excitement and put our best Disneyland faces forward.  I can do  anything for a day:)

I hope all you Disney lovers will forgive me.  Am I just old and cynical?  I don’t think so because I thoroughly enjoyed climbing up into an orange tree at 5a to capture the forbidden fruit.  Maybe my homebody, small town self should just stay put!

I wanted to tell you that if you don’t have plans for tomorrow morning, you should click over to lifeingrace girls and make those delicious looking pancakes.  Deb isn’t a blogger but she should be!  Thanks for sharing with us, dearie:)

Also, I’m loving all your post ideas for the community site  so keep ’em coming!  Send your submissions to ediewadsworth at mac dot com.  I’m even contemplating adding a chat feature to that site.  Do you follow any blogs that have one?  Do you like it/hate it?  Tell all.

And if you’ve been following the book study, I’ll be updating that post soon as well, so check back in!