Flannery O’Connor said, “There is something in us, as storytellers and as listeners to stories, that demands the redemptive act, that demands that what falls at least be offered the chance to be restored. The reader of today looks for this notion, and rightly so, but what he has forgotten is the cost of it. His sense of evil is diluted or lacking altogether, and so he has forgotten the price of restoration.”

The writer of today must have forgotten it too because I’m as guilty as the next girl of that diluted sense of evil.  My own memory shuddered at what it needed to recall to bring this story to light.  While writing this book, I was reminded of the costliness of my own redemption. This is the story of barely making it out of a house on fire—literally and figuratively. This is the story of my prodigal journey in the far country, the boot-strapping self reliance that nearly made me an athiest, and my long and anticipated return—where Christ had been waiting to welcome me to back to my true home, to His table, to lavish his gifts on someone as far gone as even me.  Mostly, it’s the story of a war that is being waged against us all and how our Father has been on a covert mission to drop down aid to us, which He has done in the form of the His own incarnate Son.  That Son, our Savior, has given his very life to ensure our rescue.  We all wake up one day to find that the world is on fire and we are in enemy territory, the greatest enemy being the sin and death that live in our own bodies.  Christ has come to fight our battles, to wage war on sin, death and hell, to bring us safely to Him, our perfect and final place of peace and rest.  His Father love is so compelling and so complete that even the most lost can be found, the most devastated, restored.

I decided to tell my story as a sort of inspirational field guide, imagining that in a stretch of dark days or lonely nights, you might find hope and encouragement in its pages; that you might breathe easier knowing that if redemption can reach me, it can reach you too.  I didn’t gloss over the hard days and years because we’re at war and I figured your dark ones have been pretty dark too.  And a bunker is no place to sugarcoat the truth.  I also changed the names and places of some people and events so that I could tell my story without compromising anyone else’s.

A few notes on the structure.

The prodigal story in Luke was my metanoia, the point of my turning, the story that God used to reach me and show me that I was redeemable.  As such, I’ve used the story as the scaffolding on which to lay mine.  When finding my way trying to organize this work, I decided to read the Story of the Father with Two Sons (the prodigal story) and see how many turnings there was in it, how one might outline it in order to make the remembering or retelling easier.  I came up with twelve verbs.  (i.e., the prodigal was squandering, hiding, repenting, etc…).  A few months later, after using this overarching method to organize what was flowing back from my memory, I came across Arthur Just’s  Commentary on Luke and found the most amazing sight, which I will include on the following page for your study and perusal.  He was referencing the work of Kenneth Bailey on the structure of the prodigal story from the eyes of the Middle Eastern world into which it was set. Arthur Just and Ken Bailey describe the story as a twelve-stanza chiasm, a crosswise (see following page) arrangement of concepts that are repeated in reverse order, where the second six stanzas reverse the circumstances of the first six.  (Stay with me, this is really cool!)

“‘The last line of each of the first six stanzas has to do with the prodigal’s physical desires, losses, needs.  The second six stanzas in their final lines (note the bold typeface) deal progressively with the restoration to sonship and its ensuing joy.’  At the center of the chiasm is the prodigal’s restoration to his father and to the household over which the father presides.  What is being described here is how outcasts and sinners are restored to the new Israel through table fellowship with Jesus.”

In other words, a few real Bible scholars had discovered Jesus using a chiastic or crosswise literary technique where he presented this story in a series of twelve stanzas, the second six undoing the actions of the first.  So what was lost in stanza 1 is restored in stanza 12 and so on. At the center of the chiasm is the climax, the repentance of the son.   I had found the jackpot and it almost exactly (a very big almost) coincided with what I was already doing—my first six chapters mostly uncovering my lostness and the next six discovering all the ways He was finding and restoring me—the whole structure of the story centering in every way on a cross.

The very essence of a symbol of paradox is a cross—that eternal sign of suffering but also of salvation, of war and peace, of death and life, of unimaginable grief and yet indescribable joy.  Chesterton would say in Orthodoxy, “we may very well take the cross as a symbol at once of mystery and health.  The cross, though it has at its head a collision and a contradiction, can extend its four arms forever without altering its shape. Because it has a paradox in its center it can grow without changing. The cross opens its arms to the four winds; it is a signpost for free travelers.”

We come home by way of Christ and His cross, who’s made every provision for finding us, saving us, and keeping us safe until He comes again.  My prayer is that this book is a signpost pointing to Him, a love letter of all the ways He’s rescuing me.  I hope these notes help you not get lost in my otherwise haphazard way of remembering my story, which is not strictly chronological.   And if you’re short on time (who isn’t?) or if I’m short on delivering a good story (which is quite possible) let me offer one sentence’s worth of cliff notes, in which I paraphrase my mentor and guide C.S. Lewis; redemption is really the only story.

Here’s what a chiasm look like.  It’s my favorite thing ever.  Sorry for the poor quality photo but I wasn’t about to type all that out and line it up just right! 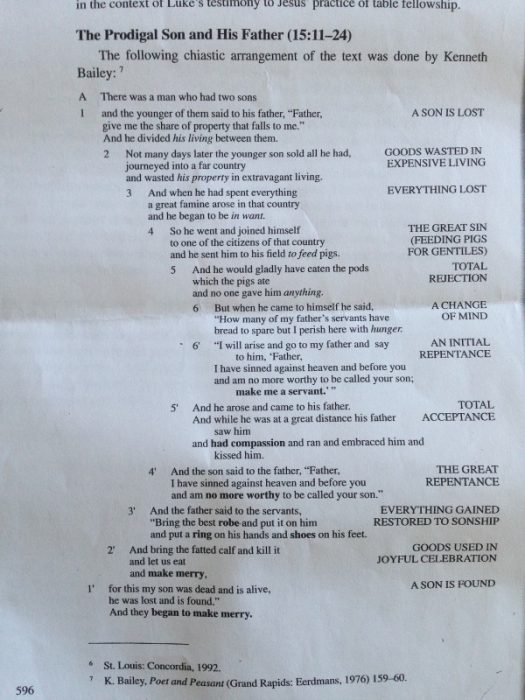